Prior to the arrival of Europeans, Panama was widely settled by Chibchan, Chocoan, and Cueva peoples, among whom the largest group were the Cueva (whose specific language affiliation is poorly documented). There is no accurate knowledge of the size of the Pre-Columbian indigenous population of the isthmus at the time of the European conquest. Archaeological finds, as well as testimonials by early European explorers, describe diverse native isthmian groups exhibiting cultural variety and already experienced in using regional trade routes. The indigenous people of Panama lived by hunting, gathering edible plants & fruits, growing corn, cacao, and root crops. They lived in small huts made of palm leaves over a rounded branch structure, with hammocks hung between the interior walls.

In 1501, Rodrigo de Bastidas was the first European to explore the Isthmus of Panama sailing along the eastern coast. A year later Christopher Columbus on his fourth voyage, sailing south and eastward from upper Central America, explored Bocas del Toro, Veragua, the Chagres River and Portobelo (Beautiful Port) which he named. Soon Spanish expeditions would converge upon Tierra Firma (also Tierra Firme, Spanish from the Latin terra firma, “dry land” or “mainland”) which served in Spanish colonial times as the name for the Isthmus of Panama. In September 1510, the first permanent European settlement, Santa María la Antigua del Darién on the Americas mainland was founded. Vasco Nuñez de Balboa and Martín Fernández de Enciso agreed on the site near the mouth of the Tarena River on the Atlantic. Balboa maneuvered and was appointed Mayor on the first official cabildo abierto (municipal council) held on the mainland. On August 28, 1513, the Santa María de La Antigua del Darién mission was erected with Fray Juan de Quevedo as the first Catholic Bishop in the continental Americas. On September 25, 1513, the Balboa expedition verified claims by indigenous people that the Panama isthmus had another coast to the southwest along another ocean. Balboa was the first known European to see the Pacific Ocean, which he named the South Sea. Panama was part of the Spanish Empire for over 300 years (1513–1821) and its fate changed with the geopolitical importance of the isthmus to the Spanish crown. In the 16th and 17th centuries, at the height of the Empire, no other region would prove of more strategic and economic importance. 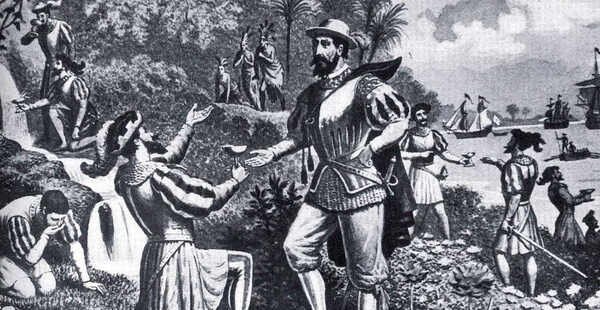 Strategically located on the Pacific coast, Panama City was relatively free of the permanent menace of pirates that roamed the Atlantic coast for over one and a half century, until it was destroyed by a devastating fire, when the pirate Henry Morgan sacked it on January 28, 1671. It was rebuilt and formally established on January 21, 1673, in a peninsula located 8 km from the original settlement. The ruins of the original city are a tourist attraction known as “old Panama”.  When Panama was colonized, the indigenous peoples who survived many diseases, massacres and enslavement of the conquest ultimately fled into the forest and nearby islands. Indian slaves were replaced by imported enslaved Africans.

Then, timing the action with the rest of the Central American isthmus, Panama declared independence in 1821 and joined the southern federation. As the isthmus’ central interoceanic traffic zone, as well as the City of Panama had been of great historical importance to the Spanish Empire and subject of direct influence, so, the differences in social and economic status between the more liberal region of Azuero, and the much more royalist and conservative area of Veraguas displayed contrasting loyalties. When the Grito de la Villa de Los Santos independence motion occurred, Veraguas firmly opposed it, and immediately joined Gran Colombia, a confederation of Colombia, Bolivia, Ecuador, Peru and Venezuela, a united Latin American nation that had long been the dream of Simón Bolívar. However, internal disputes lead to the formal abolishment of Gran Colombia in 1831, though fledgling Panama retained its status as a province of Colombia.

Panama’s future forever changed from the moment that the world’s major powers learned that the Isthmus of Panama was the narrowest point between the Atlantic and Pacific Oceans. In 1846 Colombia signed, a treaty permitting the US to construct a railway across the isthmus, though it also granted them free transit and the right to protect the railway with military force. At the height of the California gold rush in 1849, tens of thousands of people traveled from the east coast of the US to the west coast via Panama in order to avoid hostile Native Americans living in the central states. Colombia and Panama grew wealthy from the railway, and the first talks of an interoceanic canal across Central America began to surface.

The idea of a canal across the isthmus was first raised in 1524 when King Charles V of Spain ordered that a survey be undertaken to determine the feasibility of constructing such a waterway. In 1878, however, the French received a contract from Colombia to build a canal. Still basking in the warm glory of the recently constructed Suez Canal, French builder Ferdinand-Marie de Lesseps brought his crew to Panama in 1881. Much like Napoleon before him, Lesseps severely underestimated the task, and over 22,000 workers died from yellow fever and malaria in less than a decade. By 1889, insurmountable construction problems and financial mismanagement had driven the company bankrupt.

The US, always keen to look after its investments; saw the French failure as a lucrative business opportunity that was ripe for the taking. Although they had previously been scouting locations for a canal in Nicaragua, the US pressured the French to sell them their concessions. In 1903, Lesseps’ chief engineer, Philippe Bunau-Varilla, agreed to the sale, though the Colombian government promptly refused.

In what would be the first of a series of American interventions in Panama, Bunau-Varilla approached the US government to back Panama if it declared its independence from Colombia. On November 3, 1903, a revolutionary junta declared Panama independent, and the US government immediately recognized the sovereignty of the country. Although Colombia sent troops by sea to try to regain control of the province, US battleships prevented them from reaching land. Colombia did not recognize Panama as a legitimately separate nation until 1921, when the US paid Colombia US$25 million in ‘compensation.’

Following independence, Bunau-Varilla was appointed Panamanian ambassador to the US, though his first act of office paved the way for future American interventions in the region. Hoping to profit from the sale of the canal concessions to the US, Bunau-Varilla arrived in Washington, DC before Panama could assemble a delegation. On November 18, Bunau-Varilla and US Secretary of State, John Hay, signed the Hay-Bunau-Varilla Treaty, which gave the US far more than had been offered in the original treaty. In addition to owning concessions to the canal, the US was also granted ‘sovereign rights in perpetuity over the Canal Zone,’ an area extending 8km on either side of the canal, and a broad right of intervention in Panamanian affairs.

Despite opposition from the tardy Panamanian delegation as well as lingering questions about its legality, the treaty was ratified, ushering in an era of friction between the US and Panama. Construction began again on the canal in 1904, and despite disease, landslides and harsh weather, the world’s greatest engineering marvel was completed in only a decade. The first ship sailed through the canal on August 15, 1914.

In the years following the completion of the canal, the US military repeatedly intervened in the country’s political affairs. In response to growing Panamanian disenchantment with frequent US interventions, the Hull-Alfaro Treaty replaced the Hay-Bunau-Varilla Treaty in 1936. The US relinquished its rights to use its troops outside the Canal Zone and to seize land for canal purposes, and the annual sum paid to Panama for use of the Canal Zone was raised. However, increased sovereignty was not enough to stem the growing wave of Panamanian opposition to US occupation. Anti-US sentiments reached a boiling point in 1964 during a student protest that left 27 Panamanians dead and 500 injured. Today, the event is commemorated as Día de Los Mártires (National Martyrs Day).

As US influence waned, the Panamanian army grew more powerful. In 1968, the Guardia Nacional deposed the elected president and took control of the government. Soon after, the constitution was suspended, the national assembly was dissolved and the press were censored, while the Guardia’s General Omar Torrijos emerged as the new leader. Despite plunging the country into debt as a result of a massive public works program, Torrijos was successful in pressuring US President Jimmy Carter into ceding control of the canal to Panama. The Torrijos-Carter Treaty guaranteed full Panamanian control of the canal as of December 31, 1999, as well as a complete withdrawal of US military forces. 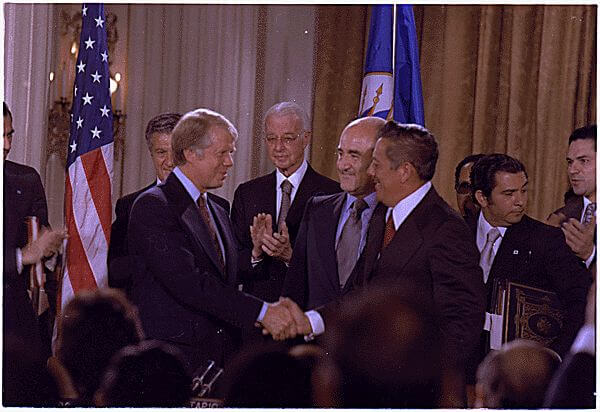 The first humans occupy Panama, and populations quickly flourish due to the rich resources found along both coastlines.

Panama is home to some of the first pottery-making villages in the Americas, such as the Monagrillo culture dating from 2500 to 1700 BC.

Panama becomes part of an extensive trade network of gold and other goods that extends from Mesoamerica to the Andes.

Balboa endures a tortuous trek from the Atlantic to the Pacific, and becomes the first European to lay eyes on what he dubbed the ‘South Sea.’

Pedrarias founds the city of Panamá, which becomes a major transit point for gold plundered from Peru and brought by galleon to Spain.

Henry Morgan overpowers Fuerte San Lorenzo, and then sails up the Río Chagres to sack the city of Panamá. After suffering a crushing defeat, a new walled city is built a few kilometers away in present-day Casco Viejo.

The ill-fated Darien scheme establishes a Scottish trading colony in the region, though it fails soon after, and plunges Scotland into economic depression. The resulting financial losses heavily influence the union of Scotland with England in 1707.

Simón Bolívar leads the northern swath of South America to independence from Spain, and Panama joins the newly formed union of Gran Colombia.

The US intervenes in Panama for the first time in a conflict that becomes known as the Watermelon War of 1856. The war starts when white US soldiers mistreat locals, which causes large-scale race riots that the Marines eventually put down.

The French are granted the rights to build a canal though Panama. After malaria and yellow fever claim over 22,000 lives, the French declare bankruptcy and abandon the project altogether.

US President Theodore Roosevelt convinces the US Congress to take control of the abandoned French project. At the time, Colombia was in the midst of the Thousand Days War.

Colombian President Rafael Reyes presents a treaty that will recognize Panamanian independence, but the matter is dropped due to popular and legislative opposition – it is not raised again until 1921.

The canal is finally completed, owing to the efforts of 75,000 laborers, many thousands of whom perish during the construction.

The riots of January 9 (now known as Martyrs’ Day) escalate tensions between Panama and the US regarding occupation rights of the Canal Zone. Twenty Panamanian rioters are killed and over 500 are wounded.

The Torrijos-Carter Treaty is signed, allowing for the complete transfer of the canal and the 14 US army bases from the US to Panama by 1999.

Following Torrijos’ death in a plane crash in 1981, former CIA operative Manuel Noriega rises to power and ushers in an era of repression.

The US invades Panama, and extradites Noriega to Miami where he is later convicted on charges of conspiracy and drug trafficking.

Ernesto Pérez Balladares is sworn in as president after an internationally monitored election campaign. Balladares emphasizes his party’s populist Torrijos roots rather than its former association with Noriega.

Mireya Moscoso becomes Panama’s first female president after a free and fair election. The US ends nearly a century of occupation of Panama by closing all of its military bases and turning over control of the canal.

78% of voters cast a ‘yes’ ballot in support of an expanded canal – voter turnout is only 44%.